I've been hacking the gtk3 vclplug for LibreOffice recently, here's the before image after scrolling up and down a few times. UI font not rendered the same as the rest of the desktop, bit droppings everywhere, text missing from style listbox, mouse-wheel non-functional 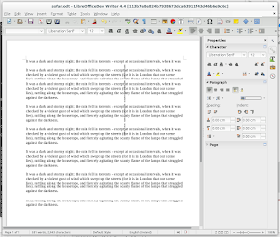 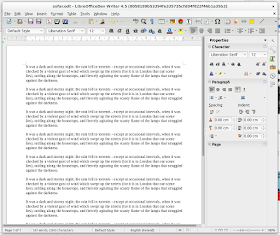 After making it possible to render with cairo to our basebmp surface initially for the purposes of rendering text, I tweaked things so that instead of re-rendering everything in the affected area on a "draw" signal we do our initial render into the underlying basebmp surface on resize events and then trust that our internally triggered paints will keep that basebmp up to date and gtk_widget_queue_draw_area those areas as they are modified in basebmp and just blit that basebmp to the gtk3 cairo surface on the resulting gtk_widget_queue_draw_area- triggered "draw". This is pretty much what we do for the MacOSX backend.

With our cairo-compatible basebmp surface the gtk3 native rendering stuff for drawing the buttons and menus etc can then render directly into that basebmp at the desired locations removing a pile of temporary surfaces, conversion code and bounds-checking hackery.

Further under the hood however the headless svp plug that the gtk3 inherits from had a pair of major ultra-frustrating bugs which meant that while it looked good in theory, in practice it still was epically failing wrt bit dropping in practice. Now solved are the two underlying clipping-related bugs. One where an optimization effort would trigger creating an overly clipped region, and another where attempts to copy from the surface were clipped out by the clip region.

Still got some glitches in the impress sidebar and of course the above theming engine is still missing a pile of stuff and slide-show/canvas mode needs implementing, but I'm heartened. Its not complete, but its now less traffic accident and more building site.
caolan at 09:54
Share